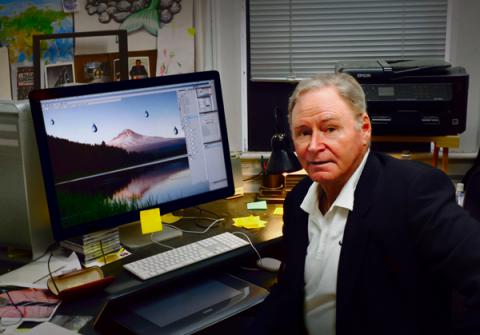 Roger Huyssen was born in Los Angeles and graduated with a degree in economics from the University of California at Santa Barbara and did graduate work at Art Center College of Design. During his long career as an artist in New York, Huyssen's work has appeared in all forms of visual communication.

His work started in the record industry where he created close to a hundred album covers from Duke Ellington and James Brown to the classic iconic guitar spaceship for Boston. His unique style and expressive concepts have been seen on movie posters, national advertising campaigns, and magazines, including over twenty Time magazine covers, several of which are now part of the permanent collection of the Smithsonian National Portrait Gallery in Washington, DC.

Commercial clients include most major corporations such as IBM, AT&T, Merck, Coca-Cola and all major TV networks and movie studios. Some of the movie poster work was created for Jim Henson's Muppet movies, several of Clint Eastwood's films and the original Star Trek movie. He has done creative character development and package designs for M&M / Mars, General Foods and the gaming software industry. Published entertainment and sports posters include Macy's Thanksgiving Day Parade, Breeder's Cup, Society of Illustrators Golden Anniversary, Universal Studio's Island of Adventure, as well as the NFL theme art for two Super Bowls.

His photo illustrations have been commissioned by Novartis, BauschLomb, Genentech, United Healthcare, Clairol, Nokia and the AD Council.

He was awarded The Distinguished Alumni Award from the University of California at Santa Barbara.

Currently he works out of his digital studio in Westport, Connecticut.